Interstate 215 or I -215 is an Interstate Highway in the US state of Nevada. The highway forms a beltway around the city of Las Vegas, and is also known as Clark County Highway 215 ( CC 215 ). The road is known as the Bruce Woodbury Beltway and is 85 kilometers long.

I-215 and County Road 215 form a three-quarter ring around the south, west, and north sides of Las Vegas. I-215 begins at Henderson at an interchange with Interstate 11 and then heads west through the southern suburbs of Las Vegas. The route to McCarran International Airport has 2×3 lanes. There are 2×5 lanes of traffic between the McCarran International Airport and the Interstate 15 interchange.

Most of Interstate 215 is in Clark County administration. Only 7 kilometers is under the control of the Nevada Department of Transportation, although a significantly longer portion of the beltway has Interstate Highway status. NDOT operates two sections of I-215, between I-515 and Stephanie Street and between I-15 and Warm Springs Road. The remaining 63 miles is in Clark County administration.

On the other hand, not the entire route is signposted as I-215. About 11 miles is signposted as I-215, between I-515 in Henderson and I-15 in south Las Vegas. The rest of the beltway is signposted as Clark County Highway 215, in anticipation of a later upgrade to Interstate Highway. Several parts of the county road have been developed as a freeway, but not everywhere. It was the first time in the United States that a county was responsible for financing and constructing an Interstate Highway, normally these roads are largely funded by the federal government or the state.

Most of the Beltway will be built using local funding, rather than federal funding, which will help accelerate construction. I-215 was assigned to the entire highway up to US 95 in 1993, but most of it is a county road. It wasn’t until 1996 that the first section of the interstate opened between I-15 and McCarran International Airport on the south side of Las Vegas. In 1999, the southern ring road was completed ahead of schedule. In 2003 the entire ring road was completed, although the northern part consisted only of frontage roads and is not yet grade-separated. In 2017, the second carriageway opened at Durango Drive.

Between 2015 and 2018, the northwestern part of the route was expanded into a freeway, between Craig Road and Hualapapai Way over a length of 6 kilometers. Work started on September 10, 2015, this part was put into use on May 1 and 2, 2018.

Between 2015 and 2024, the Centennial Bowl Interchange was expanded into a full-fledged interchange between two highways, I-215 and US 95. Work on the first phase started on August 6, 2015. On 12 July 2017, it opened its first flyover for traffic from east to south. On September 28, 2020, the south-west flyover opened. Construction began on January 11, 2021 on the final phase, a $155 million project to build the remaining flyovers and the main carriageway of I-215 through the interchange. This part is to be completed in early 2024. 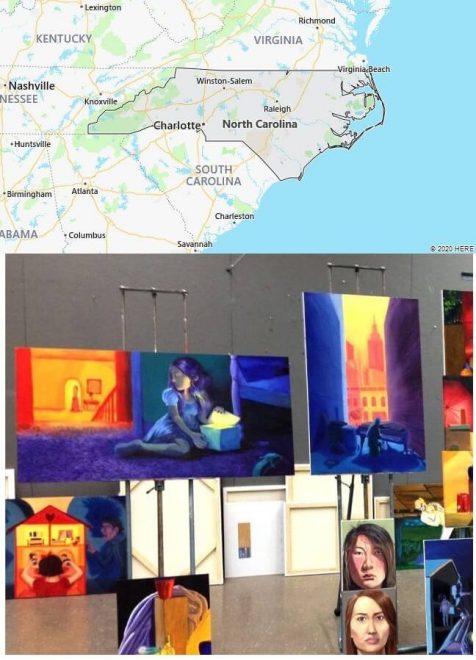